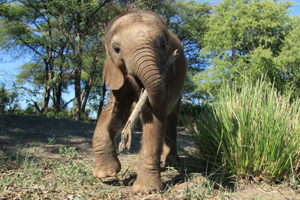 Boipuso: was rescued due to a tragic incident that took place, where she was intercepted at a local tavern and harassed by patrons of the bar. At only 2 months old, she was confused, lost and no one knew the whereabouts of her mother or family herd. She had several bruises and cuts, but after two months of intensive care, she fully accepted the team and has become the center of everyone’s attention, including the calf herd. She is very clever, learning quickly from the other elephants. We are very pleased to see her grow and develop and has doubled her weight in six months under our care!  Photos of Boipuso’s rescue can be seen here. 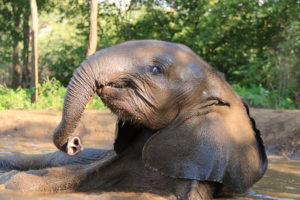 Molelo: Rescued from a bush fire in the Okavango Delta, at only a few months old, Molelo’s condition was critical and suffered from severe dehydration and had burns on the bottom of his feet and across his body.  He spent more than two weeks at EWB’s Conservation Ecology Research Station in the delta as he adapted, and until a vet could determine if he was well enough for us to fly him to our Intensive Care Unit in Kasane. Molelo is appropriately named, as its the Setswana word for “fire!” After several months of rehab, Molelo fully recovered, and now is a healthy, playful, charismatic young bull. Our “water baby”  loves splashing around in the orphans’ pools… and has won the hearts of all of us that care for him. 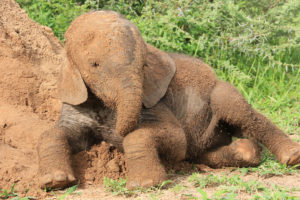 Tuli: Only a month old, tiny Tuli came from the Tuli Block, the mid-east portion of Botswana. After an unfortunate human-conflict situation, Tuli lost her family and was found wandering by a lodge owner. She was airlifted by EWB’s rescue plane and arrived on-site that same day of call-in. Tuli was in critical care but is now integrated into the small herd and full of spunk! She has bonded tightly with Panda and follows her adopted big sister, everywhere. 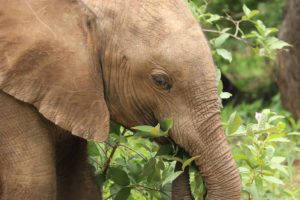 Panda was discovered alone in a farmer’s fenced field in Pandamatenga, in Chobe, a northern District of Botswana. Despite waiting several days in hopes of being able to reunite her with her herd, no other elephants were seen or heard from. After fending off a pack of hyenas, the farmer concluded Panda had little chance of survival on her own, and contacted EWB to care for her. Since then, Panda has grown to become the young matriarch of the elephants residing at the orphanage, settling in and tending to all the younger elephants.