Why do aerial surveys?

Elephants and wildlife are often in remote and difficult terrain and the best way to count them is from the air. Aerial surveys provide vital information on their status, seasonal distribution and abundance. They improve our understanding of wildlife populations, which allows us to base our conservation action on solid scientific understanding and guide future research and monitoring, with an emphasis on evaluating the effectiveness of management policies.

EWB has conducted extensive aerial surveys to help determine elephant and wildlife numbers, their habitat needs and seasonal distribution. Since 2001, the EWB team has amassed over 4000 hours of aerial survey flying, counting wildlife in Angola, Botswana, Namibia and Zambia. EWB is meticulous and rigorous in conducting the most comprehensive aerial surveys, which are providing new and essential information on the population status of elephants and other threatened wildlife species.

How We Conduct Surveys

The 2018 dry season census was a collaborative effort, jointly commissioned by the Botswana Department of Wildlife and National Parks (DWNP) and Elephants Without Borders (EWB), and is an essential follow-on to the success of EWB’s 2010 and 2014 aerial surveys. The highly experienced survey team included a Government of Botswana DWNP observer, and the newly released results reveal important changes in wildlife populations and a significant increase in elephant poaching. This is the first large-scale aerial survey of Botswana’s elephants and wildlife since 2014.

Elephants population estimate was 126,114. Statistically, since the 2014 survey the elephant population is considered unchanged. However, in Chobe NP, the long-term trend in elephant populations is downward, with estimates decreasing from 26,609 on the 2010 survey to 17,634 in 2014 to 15,404 in 2018. Bull populations decreased notably by 42% between 2014 and 2018. In the Okavango delta and surrounding areas elephant numbers have remained stable since 2010 at roughly 76,000.

During the survey, we observed that elephants are facing a growing poaching problem in northern Botswana. Our estimate revealed of over 400 elephants poached in Botswana within the last year, or more than one elephant poached per day. (download Evidence of a Growing Elephant Poaching Problem in Botswana, Current Biology 29, July 2019.)

North of Botswana, poachers have decimated elephant herds in both southeast Angola and southwest Zambia (download Poaching and human encroachment reverse recovery of African savannah elephants in south-east Angola despite 14 years of peace. Plos One, March 2018.)

Poaching in Botswana does not appear to have reached similar levels of severity at this time, but evidence suggests that this problem has now reached Botswana and is escalating.

This recovery of wildlife in northern Botswana is an encouraging discovery, as the country’s economy relies heavily on wildlife tourism. Tourism is the country’s second largest foreign exchange earner after diamonds, contributing 2.1 billion (11.5%) to GDP, while employing nearly 80,000 people.

From July to October 2014, Elephants Without Borders (EWB) in collaboration with the Botswana Department of Wildlife and National Parks (DWNP) flew a 280-hour aerial survey over a 98,425 km2 area of northern Botswana, counting elephants and other wildlife. This survey was flown as part of the Great Elephant Census (GEC), which was funded by Mr. Paul G. Allen and his sister Jody.

EWB flew consecutive seasonal surveys during both the wet and dry seasons between 2011 and 2013 over the Chobe District, a survey area of about 22560 km2 in extent, which included Chobe National Park (NP), Chobe Forest Reserve (FR), Kasane FR and Extension, Kazuma FR, Sibuyu FR and Maikaelelo FR, and surrounding Wildlife Management Areas.
Results revealed herbivore populations in the District appear to be stable. However, the extent of bush fires across large areas of the District, a major determinant in the health of the ecosystem, are concerning. Also, the level of deforestation and encroaching human activities for arable fields along the Northern Plains ecotone and Chobe FR ridge, which both fall within important wildlife corridors are destructive, and will impede wildlife movements and should be conserved. The allocation of arable fields in the middle of identified elephant pathways is hindering wildlife access to water, which will lead to an inevitable increase in human elephant conflict. While there is considerable development taking place within the District, EWB is determined to continually assist local, district and central government authorities to provide them with scientific data to ensure a positive relationship between people and wildlife co-existing in the region. 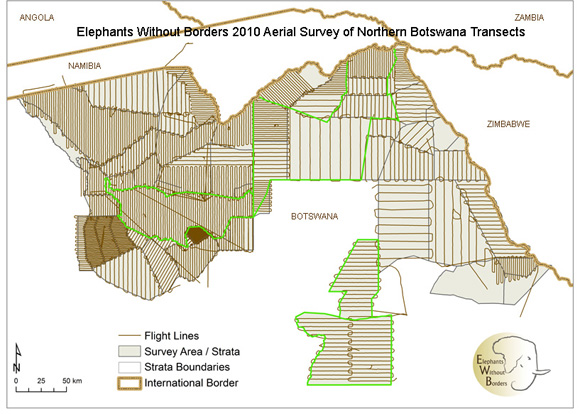 During the 2010 dry season, a fixed-wing aerial survey of elephants and wildlife was flown over the core wildlife conservation areas of northern Botswana. The aerial survey took nearly 250 hours of flying time, a flight line total of 25,598 km, covering a total of 73,478 km2, which included the National Parks of Chobe, Makgadikgadi, Nxai Pan, Moremi Game Reserve, the Okavango Delta and the surrounding Wildlife Management Areas in the Ngamiland, Chobe and Central districts. Technically robust, the survey’s sampling intensity averaged 20% in comparison to 5% during previous surveys and is the first independent fixed-wing aerial survey to provide concession level estimates for wildlife populations in Botswana.

Between 1993 and 2004, the Botswana government had conducted eight systematic aerial surveys. EWB’s 2010 data allowed for a comparative analysis of wildlife distribution, abundance and trends over time. However, some of the results were unexpected and revealed that in 17 years, the populations of 11 animal species in the Okavango Delta specifically had plummeted by an average of 61 per cent, while elephant numbers across northern Botswana appeared to have stabilized, and in the Chobe district where the highest density of elephants occur, the majority of wildlife populations remained fairly stable or were increasing. These findings raised much concern, awareness, and some scepticism, however also stimulated action, on many levels, to ensure a better understanding of the drivers causing downward trends.

This study also verified the importance of continual monitoring and that conservation management requires a solid understanding of wildlife population dynamics and reliable estimates of population densities, while further research is required to ensure a healthy ecosystem.

In January 2003, at the end of almost 30 years of civil conflict in Angola, EWB flew the first systematic aerial survey, ever, to estimate elephant and wildlife numbers in southeast Angola. The survey area, Luiana Partial Reserve, was severely affected by the civil war. It is reported that 100,000 elephant were slaughtered for their ivory and meat to help fund the war. In this area, which was left with virtually no wildlife, EWB, together with Conservation International, was the first organization to record wildlife population returning to southeast Angola. EWB expanded their surveys to encompass the neighbouring protected area, Sioma Ngwezi National Park, in southwest Zambia, (the last estimates for elephants in this remote park were taken in 1969), and Namibia’s Caprivi Strip. These surveys provided the first comprehensive regional assessment on the status of elephant populations. Subsequently, aerial surveys were conducted each year, over 3 years, which provided data to undertake comparative analyses.

EWB’s data from these aerial surveys revealed that elephants were returning in growing numbers to southeast Angola. The 2005 survey data of the Caprivi Strip, suggests that elephant numbers increased by only 15%, since 1998, which, is considered a relatively small population increase over such a timeframe. However, in Sioma Ngwezi, elephant numbers appeared to have decreased from 1,212 in 2003 to 385 in 2005. In contrast, the three aerial surveys of Luiana Partial Reserve in southeast Angola indicated that elephant numbers were increasing rapidly and expanding their range, from 329 in January 2004, to 1827 in November 2005, to an estimate of 8000 in 2007. The end of the war in Angola appears to be providing the requisite security for elephants to return to their ancestral homeland. 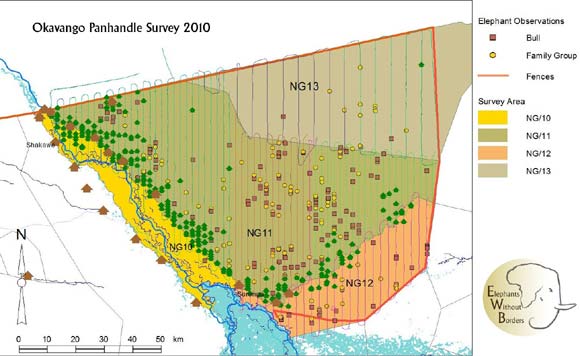 The Okavango Panhandle is considered a high human-elephant conflict (HEC) area in Botswana. In this troublesome conflict zone, elephants are trapped by the Caprivi border fence and northern buffalo fence. The impenetrable floodplains of the Okavango River restrict elephants moving west out of the region. Within this 8500sq km area, the only permanent water is in the Okavango River, where many settlements are located. During the dry season, elephant herds run a daily gauntlet through settlements to reach water in the Okavango River. How many elephant are trapped in this region? What is the population growth rate? What management options are there to help relieve this compression? To help answer these pertinent questions EWB collaborated with Anna Songhurst, a PhD student from the University of Botswana and Imperial College, London, studying HEC. Together we flew 2 aerial surveys. The first survey, conducted in August 2008, yielded an estimate of 9000 elephants trapped in the Okavango triangle. In July 2010, the second survey was conducted and the survey results estimated a staggering 14,000 elephants. ?EWB suggests that corridors be created to allow elephant to move out of this region. Corridors must be created along wildlife migration paths that meet up with the fence. Creating small gaps or openings in the fence will allow elephants to move into the Caprivi and Angola where elephant densities are low and relieve HEC along the Okavango River.

Northern Botswana
Dry Season Fixed-wing Aerial Survey of Elephants and Wildlife in Northern Botswana, July-October 2014, Contact us at EWB offices to request a copy of report.