Elephants are in crisis, but there is hope. A massive effort is underway to count Africa’s remaining elephants, and the information will save their lives.

On Aug 31, the results of the immense three-year Great Elephant Census (GEC) project, the first-ever pan-African survey of savanna elephants using standardized data collection and validation methods were released. Led by Principal Investigator Mike Chase and EWB, funded by billionaire philanthropist Paul G. Allen, managed by a team at Paul Allen’s Vulcan Inc., the scientific report confirms substantial declines in elephant numbers over just the last decade. The ivory trade and poaching pose serious threats and there is now a risk that savannah elephants could disappear from parts of Africa.

The Pan-African survey shows the estimated savannah elephant population to be 352,271 within the 18 countries surveyed to-date, representing at least 93 percent of savannah elephants in these countries. For savannah elephant populations in 15 of the GEC countries, for which repeat counts were available, populations declined by 30 percent between 2007 and 2014. The current rate of species decline is 8 percent per year, primarily due to poaching. High carcass ratios were discovered in many protected areas indicating that elephants are struggling both within and outside of parks. The scientific report was published on August 31, in the peer-reviewed open access journal PeerJ and is freely accessible at https://peerj.com/articles/2354/

Overall, 90 scientists, six non-governmental organization partners, consultants, and two advisory partners collaborated in the work, including EWB, the Wildlife Conservation Society, the Nature Conservancy, Frankfurt Zoological Society, African Parks Network which partnered with in country park biologists, rangers, and game wardens. The GEC teams flew a total of 294,517 km of transect lines to sample 218,238 square km or 24 percent of the total ecosystem area of 893,961 square km. This involved 9,700 hours (406 days) in the air with an average flight time of nearly three hours, by 81 airplanes and 286 crew.

Historically, counts of Africa’s savanna elephants have varied in quality and some have been speculative, which can lead to incorrect conclusions about population status and trends. An accurate count of the African elephant population using up-to-date scientific techniques is a vital step in managing conservation efforts, identifying poaching hotspots and guiding law enforcement interventions, and assessing the impact of threats, such as habitat loss. The GEC team used the most accurate, up-to-date counting and statistical methods to analyze data, accurately determining the number and distribution of the great majority of African savanna elephants and now provides a baseline on a continental scale for future surveys and trend analyses, that wildlife ecologists can use to coordinate conservation efforts.

RESULTS: The following is a listing of country-by-country findings from the Great Elephant Census. For each of the 18 countries flown to-date there is a listed GEC elephant count – the number of live elephants counted during the Census – and a carcass ratio, percentage of dead elephants observed during the count. Carcass ratios of more than 8 percent are considered to indicate poaching at a high enough level to cause a declining population. Where relevant, observations reference each country’s most recent historical baseline data.

BOTSWANA: GEC elephant count: 130,451, Carcass ratio: 7%, Observations: The population appears to have decreased by 15 percent since 2010, but larger area covered in GEC.

NORTHEAST DEMOCRATIC REPUBLIC OF CONGO: GEC elephant count: 1,959, Carcass ratio: N/A – not reported., Observations: Since 2010, this area saw the second fastest population decline of any country in the dataset.

ETHIOPIA: GEC elephant count: At least 799, Carcass ratio: N/A – not reported, Observations: Elephants were not located where they were expected to be. Because of this, the general area was examined, but a scientific count was not conducted. The Census observed human encroachment in Babile Elephant Sanctuary and an unexpectedly large elephant population in Omo.

MALI: GEC elephant count: less than 253, Carcass ratio: 10%, Observations: Part of herd may have been missed. Without intervention, it is possible that the small population here could go locally extinct.

UGANDA: GEC elephant count: 4,864, Carcass ratio: 0.5%, Observations: Population numbers have increased from the less than 800 elephants that survived the height of poaching in the 1970s and 1980s.

ZAMBIA: GEC elephant count: 21,758, Carcass ratio: 85% ratio in Sioma Ngwezi National Park; 3% for the rest of Zambia, Observations: There were substantial declines along the Zambezi River, but other areas were stable.

ZIMBABWE: GEC elephant count: 82,304, Carcass ratio: 8%, Observations: The Census showed mixed results. Overall, the population was down 6 percent. Within the Sebungwe region, populations were down 74 percent. 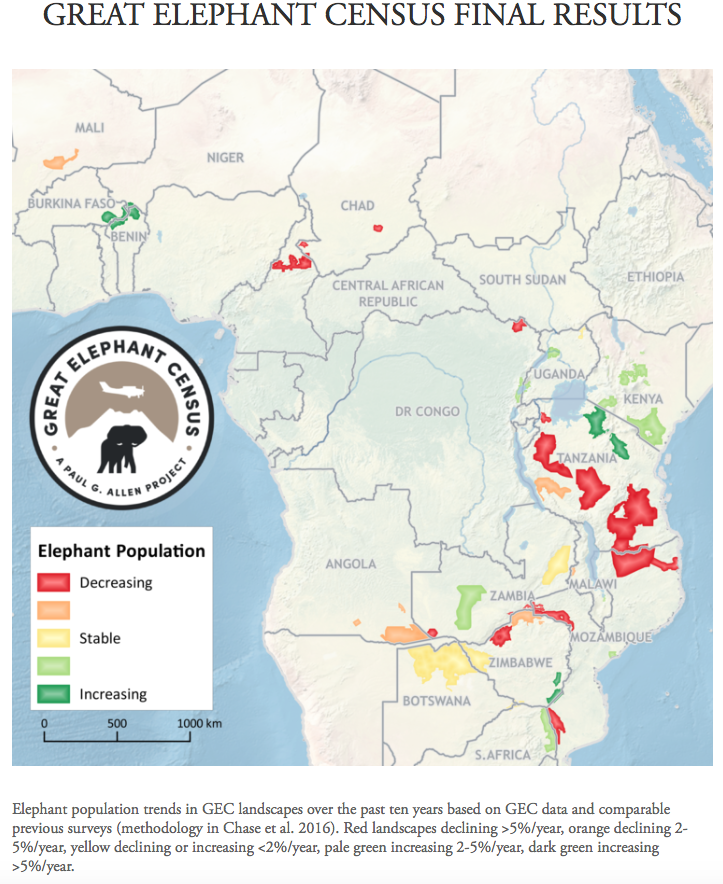 In the NEWS about the GEC Results:

Links to News about the GEC: