Walking with Elephants, produced by October Films for Channel 4 UK. Filmed 2019, aired May 2020. A three-part series following Levison Wood, passionate explorer, conservationist, author and presenter of “Walking the Nile” and “Walking the Americas”, on a totally new kind of adventure. Led by the elephants themselves, rather than a compass or a map, this series follows a migration route from the salt pans of the Kalahari Desert where the epic journey begins to the nutrient rich lands of the Okavango Delta. The visually stunning series Walking with Elephants gives us a deeper understanding than ever before of the majestic elephants of Botswana. 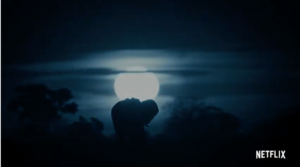 Night on Earth, Episode “Sleepless Cities” filmed 2019, aired January 2020 Netflix, Plimsoll productions. When the sun goes down, a new world awakes. Across the globe, in six episodes, the series discover a hidden side to the world’s greatest landscapes and animals. This nature series’ new technology reveals wonders of the planet and lifts night’s veil to reveal the hidden lives of the world’s creatures. By nightfall, when humans are usually sleeping, “Sleepless Cities” episode shows everything from elephants to bears to leopards coming into the cities and towns for food or to access water. 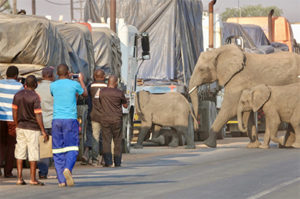 Elephants, the Gentle Giants, Zorilla films (2018) for Doclights / NDR Naturfilm, Arte, ORF. Two years in the making, Elephants- the Gentle Giants is a  two-part series that was filmed in Botswana, Namibia, Zambia and Zimbabwe, bringing the viewer up close and personal to elephants and provides a better insight into the sensitivities, intellect and behaviors of elephants.  The film has breathtaking scenes of large herds in northern Botswana, and aerial footage, from unusual perspectives thanks to remote-controlled cameras and in aesthetic slow-motion studies, providing new perspectives on the gentle giants. EWB’s work is featured in part 2 of the series, focusing on the human- elephant interface, our co-existence and conflict studies and demonstrates the challenges of living with large herds of elephants and how we are trying to address them. 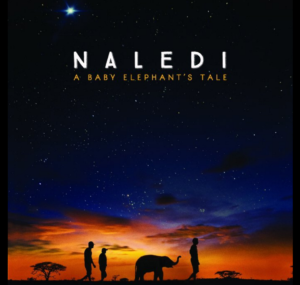 Naledi: A Baby Elephant’s Tale tells the incredible, true-life story of a baby elephant born into a rescue camp in the wilderness of Botswana. When she’s suddenly orphaned at six weeks of age, it’s up to Mike and the men who look after her herd to save her life. The movie touches on the parallels of the plight to save her wild cousins, intelligence of elephants, their majestic and familial nature, and why it’s so important to protect the species, which as most people know has been a target of poachers for decades upon decades.

Minds of Giants, Vulcan Productions & Off the Fence Productions (2016) Winner at the Jackson Hole International Elephant Film Festival for Science and Elephants. 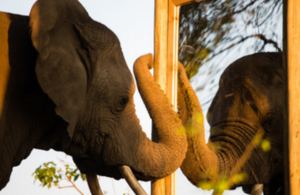 Mind of a Giant explores what it is like to be an elephant, as revealed by revolutionary new research, much of which has been conducted especially for this program. The story starts with an accidental discovery. As a team of scientists struggles to find out how many elephants are left in Africa, they discover intriguing new behavior. In order to survive, the elephants are learning. They are clearly collaborating and passing information between them. The African elephant is way smarter than we ever realized. Elephants can co-operate, they can problem-solve, they have self-awareness. Some would say they are conscious. They certainly exhibit empathy, grief, joy, fear and revengefulness. We are discovering that elephants must be considered alongside the great apes and cetaceans as one of the cleverest and most complex creatures on the planet. We are also losing them fast…. Aired on Nat Geo Wild, Destination Wild, for airing times and preview clips, see http://channel.nationalgeographic.com/wild/destination-wild/episodes/mind-of-a-giant/ Trailer: https://vimeo.com/156902859

Wildways: Corridors of Life, First Light Films (2016) is a one-hour documentary, shot on three continents, the film showcasing cutting-edge solutions to making room for wildlife in an ever more crowded globe. Recent research shows that islands of habitats made of parks and preserves are too small and disconnected to sustain healthy populations of wildlife. 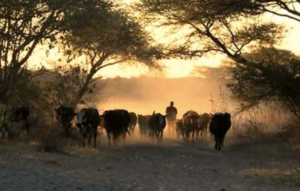 A new approach called Connectivity Conservation is attempting to link these isolated groups of wildlife in novel ways. First Light joined EWB in Botswana to showcase how elephants are leading the way for policy makers and decision makers and communities to come together and set aside viable conservation habitat in a massive scale through the Kavango-Zambezi Transfrontier Conservation Area initiative. On PBS International,  http://pbsinternational.org/programs/wildways-corridors-of-life/ and to learn more, see http://www.wildways.us/ 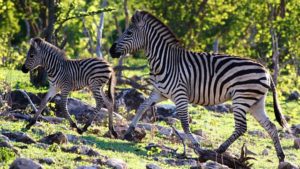 Nature’s Epic Journeys: Zebra, BBC Productions (2016) Thousands of zebra face lions, hunting dogs, drought and starvation as they undertake the world’s most recently discovered migration. Braving one of Botswana’s most brutal wildernesses, they make Africa’s longest land migration to reach the rich grasslands from Chobe National Park to Nxai Pan National Park. EWB and Robert Sutcliffe hosts Liz Bonnin as she leads a team of scientists and film-makers using cutting-edge technology to attempt something that has never been done before – following the zebra on the ground, every step of the way, to reveal the secrets behind this brand new discovery. http://www.bbc.co.uk/programmes/b07czmbl

Somewhere on Earth, Patly Productions (2015) The series asks “What if the Garden of Eden really existed Somewhere on Earth?” Season 6 takes us to Botswana, a land of Savannah and desert in southern Africa, heir to a wealth of wildlife. The region of the Kalahari covers almost the entire country, and is a sanctuary for wild animals. From the desert sands to the oasis of a lush delta, the Okavango is the river that never reaches the ocean. It vanishes into the sands of the Kalahari. Botswana, with its 2 million inhabitants, has managed to preserve its magnificent wildlife. This is a safe haven for elephants. Someday, Botswana may be their last refuge. 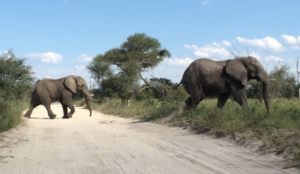 This episode visits 3 people in Botswana, Prince Wright in the Kalahari teaching his son his rites of passage, Tonic Dinonoka from Etsha assisting his community and Tempe Adams has been studying African elephants under NGO Elephants Without Borders and has devoted herself to the cohabitation of humans and elephants. See the full trailer http://www.patlyproductions.com/pages/catalogue.php?lang=en&vusurterre=40

CNN “Inside Africa” (2014) Can be viewed in 3 parts on the CNN website: 1) Mapping the movements of elephants: http://edition.cnn.com/video/data/2.0/video/international/2014/01/13/spc-inside-africa-elephants-botswana-a.cnn.html?iref=allsearch 2) Can elephants and humans co-exist http://edition.cnn.com/video/data/2.0/video/international/2014/01/13/spc-inside-africa-elephants-botswana-b.cnn.html?iref=allsearch 3) Why are artificial water holes controversial?http://edition.cnn.com/video/data/2.0/video/international/2014/01/13/spc-inside-africa-elephants-botswana-c.cnn.html?iref=allsearch 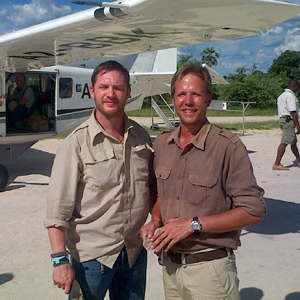 Tom Hardy’s Poaching Wars, Episode 2 (2013)
Tom Hardy embarks on a journey through Africa to uncover the truth about elephant and rhino poaching. In this episode he meets with Tshekedi Khama, the Botswanan Minister for the Environment, Wildlife and Tourism, and finds out how harmful the authorities consider the illicit ivory trade. Flying out to the Okavango, he visits Botswana’s esteemed elephant ecologist, Dr. Mike Chase where they talk about conservation and research. He then joins members of a crack team from the Botswana Defence Force as they scour the country’s northern borders for illegal poaching activities, and, in Mozambique, he encounters a civil war veteran who explains how two decades’ work nurturing elephants has been undone in recent years. The actor completes his journey at a rhino sanctuary in Tanzania, where a baby elephant turns up to bid him a surprise farewell. http://www.youtube.com/watch?v=nlJWDefJQdU 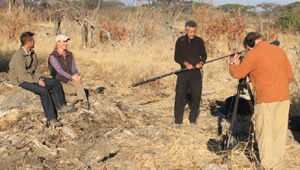 Following ancient African elephant migration paths, Tracks of Giants, is a 5 month west to east journey connecting major conservation nodes to promote a greater awareness of conservation, human community and leadership issues relevant to southern Africa, and applicable to many areas of the world. The journey aims to rekindle the rapidly declining indigenous knowledge base of the human – animal interface, and indigenous solutions to conservation challenges and issues. A team of trackers, conservationists and media will travel by foot, cycle (in regions outside of conservation areas and wildlife parks) and kayak in the Okavango Delta and Zambezi through eight major conservation nodes. Along the way, they will meet with local communities, work with partners, survey and document animal movements and conservation issues. Clip prelude to the journey: http://vimeo.com/40527244

As EWB joins their journey, the team speaks to locals about human-elephant conflict and other conservation issues. EWB’s Dr. Mike Chase & Kelly Landen weigh in on the conflicts. http://vimeo.com/48010578

Road to Eden: Mythical Roads (BoTravail, productions) (2013)
Aired on France 5 Public Television, the series is a traveling narrative, this episode on a journey through Botswana from the Okavango Delta to Chobe National park, showcasing nature and wildlife but through the eyes of a human-perspective, looking at how humans perceive elephants and the wildlife that they must co-exist with. (click here to access all Mythical Roads episodes with ZED account)

Al Jazeera news: “Botswana’s Okavango wildlife threatened” (2011)
Research shows that many mammal species are in rapid decline, with drought seen as the biggest cause. Botswana’s Okavango Delta is one of Africa’s most scenic and unspoiled wilderness areas, however, it is losing its wildlife at an alarming rate. According to research, the species decline is the result of human encroachment, game fences and poaching. The most potent factor, however, is seen to be drought. Al Jazeera’s Peter Greste reports from the Okavango Delta.
http://www.aljazeera.com/video/africa/2011/08/20118145513313818.html 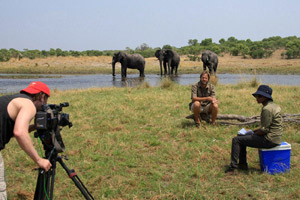 BBC news program: Fast Track (2010)
“Providing a safe haven for elephants in Botswana” produced by Mike Holding and Tania Jenkins of for the BBC Natural History Unit and Animal Planet. Botswana has the highest population of elephants in the world – around 120,000. One man who gets closer to them more than most is scientist Dr Michael Chase. Fast Track travelled to the northern region of Botswana to see him in action.http://news.bbc.co.uk/2/hi/programmes/fast_track/9157005.stm 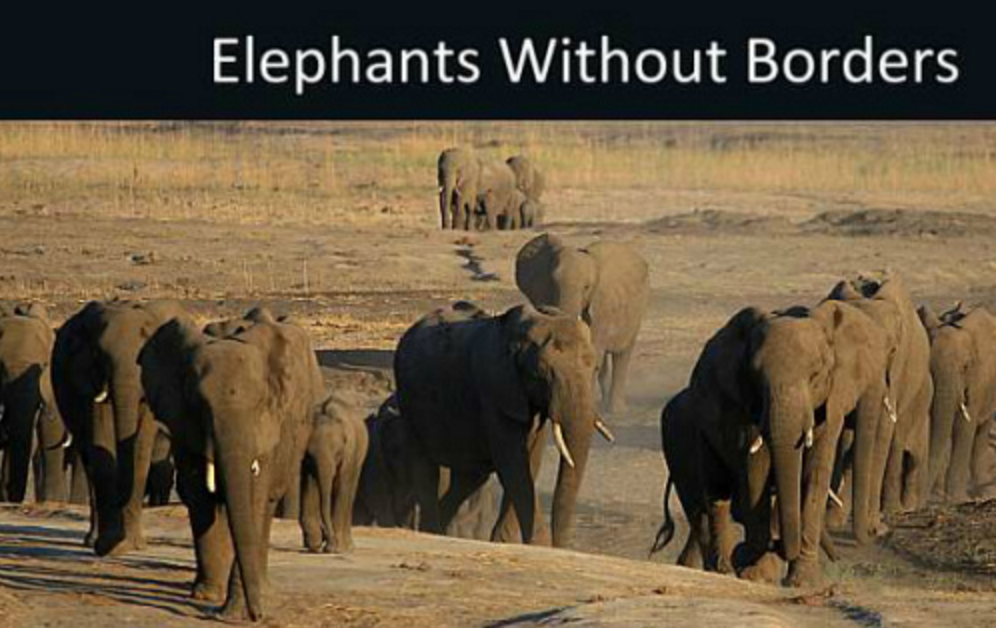 This is a story of vision, struggle, hope, and one man’s dream to bring freedom to Africa’s elephants. The film is an extraordinary journey with Dr. Mike Chase, Motswana ecologist, raised in Africa’s harsh wilderness. He talks passionately of his dream to create a scenario he calls “Elephants Without Borders” – a system of contiguous migratory corridors – that could bring freedom for thousands of elephants to range across Africa.We come to share his extraordinary vision, to bring down the barriers which blockade traditional migration routes, to open up new elephant havens, and lead the way for elephants to a new sanctuary, a trans-frontier conservation area without man-made borders.

In the UK, aired on BBC Natural World:  http://www.bbc.co.uk/programmes/b00hhf6f#broadcasts

In the USA, shown on Animal Planet Network’s Wild Kingdom, under the title “Elephants: Breaking Boundaries” Scenes from the film: http://animal.discovery.com/videos/elephants-breaking-boundaries-saddest-elephant-ever.html, http://www.animalplanet.com/tv-shows/wild-kingdom/videos/an-elephant-oasis/

“Free Passage for Giants” RichRed films, a WDR Documentary Special (2009)  Angola is witnessing a giant homecoming. After decades of civil war, elephants are returning to the now peaceful African country on ancestral routes, which lay dormant for over thirty years. Scientists and locals are watching with surprise how thousands of elephants repopulate southeast Angola, although the area is apparently still riddled with landmines. Elephant trails are paving the way for other animals and people, giving them safe access to long lost homes and resources. http://www.richred.com/work/clips/fp.html

Viewers please be advised to keep a good lookout for more details here, on the internet, in your local listings, or subscribe here to our newsletter and we will let you know. Subscribe