Grey Frontiers: our landscape approach to conservation. The best approach to conservation should be holistic but also based on science and data.  Our work aligns plans and policies with adjoining parks and stakeholders across the southern Africa region, between Botswana, Namibia, Angola, Zambia and Zimbabwe. This region is collectively known as the Kavango-Zambezi Transfrontier Conservation Area (KAZA TFCA), a unique conservation, tourism and sustainable development collaboration between  the five-countries.

Arguably the single biggest wildlife conservation challenge faced within the KAZA TFCA is the severe imbalance in elephant numbers between key elephant habitats. The region hosts over 200,000 elephants, but they have grossly distorted distributions between countries, at present. Over half of the contiguous population of elephants is in northern Botswana, while large areas of potential habitat in Angola and Zambia are mostly empty. (see Aerial Surveys) Allowing re-colonization of under utilized habitats will result in a more dynamic ebb and flow of elephant numbers, creating a natural migratory system across the five countries in the KAZA TFCA. But before elephants can move freely between Botswana and other countries, threats such as poaching, landmines, expanding human settlements and development, veterinary fences, and agriculture must also be considered or addressed.

Elephants have no regard for political boundaries. We are working to restore natural movement patterns driven by seasonal availability of food and water. Our pioneering elephant movement study provided the first evidence that elephants were moving passport-free between the KAZA countries. 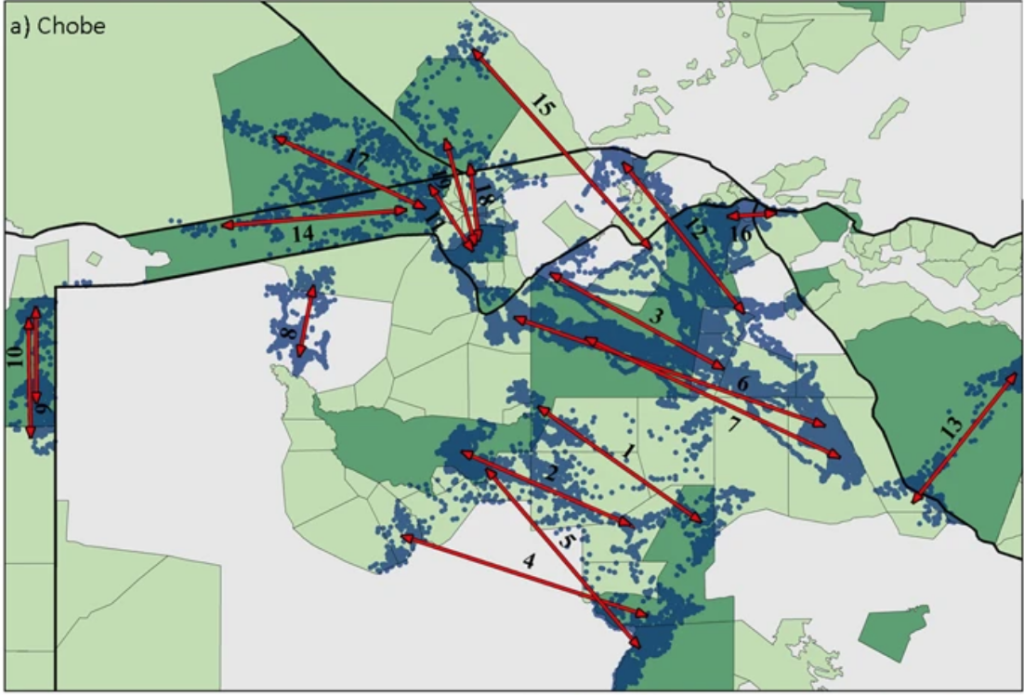 Our cross-border vision for elephant conservation is based and dependent upon the creation of ecological corridors linking key protected areas across and within the five countries, in a way, which will allow unimpeded movement of wildlife across the region while simultaneously bringing tourism-related opportunities to improve livelihoods amongst local communities and sustain natural long-term habitat dynamics.

Over the past 18 years, EWB has attached satellite-connected collars to almost 200 elephants (see Satellite Monitoring). Tracking data from these animals is being used to identify important elephant corridors and work with governments in KAZA to protect those areas. We continue to collar 10-20 elephants each year to expand our understanding of elephant movements and identify new corridors and habitat changes throughout the region.

Restoring natural elephant migration routes and ensuring small-scale urban corridors also reduces human-elephant conflict. (see Living with Wildlife) This corridor strategy is the best mitigation technique to better the livelihoods of local communities by providing environment and ample space for wildlife to navigate from one habitat patch to another without affecting the livelihoods of people. 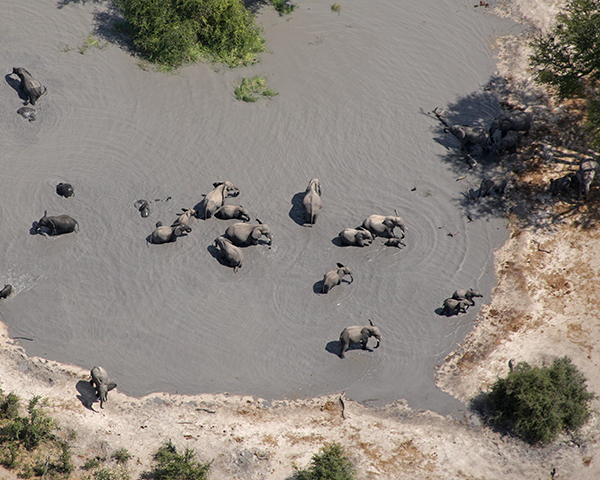 Elephants depend on water, and the distribution of water dictates where they can live. The Kalahari Desert, which means ‘great thirst land,’ is an ironic choice of home considering elephants drink about 170 liters of water a day. Wide paths, trodden by generations of elephants, lead from one natural waterhole to the next, guiding animals to water as they traverse Botswana’s semi-arid landscape. Now, climate change, bush fires and reoccurring droughts are making water availability unpredictable and scarce in natural waterholes. As a result, elephants are seeking water near human settlements where this can lead to problems for both people and elephants. Strategic placement and management of artificial waterholes may also alleviate human-elephant conflict by keeping elephants and other wildlife away from people.

Artificial waterholes have been erected by the 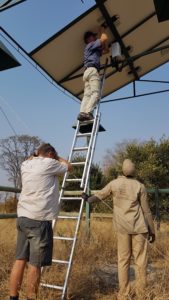 Department of Wildlife and National Parks, in some areas of the park systems. EWB, working in conjunction with the DWNP, started a pilot project to monitor the wildlife utilizing the waterholes, during both day and night, and the impacts they may have. MSc candidate, Matt Davis from the Imperial College, London monitored these artificial waterholes to provide baseline data on utilization as part of a wider study on the effectiveness of artificial waterholes as a wildlife management tool and tourist attraction.

More recently, EWB had been given permission to assist in ensuring some of the artificial waterholes were functioning properly. Botswana is presently, affected by a severe drought, one of the worst that the Southern Africa sub region has ever faced in recent years. The drought poses a danger to both wildlife and humans especially in the northern part of the country. Realizing the urgency, EWB took to the field to assist and are pleased that we have managed to ensure that they are functioning. 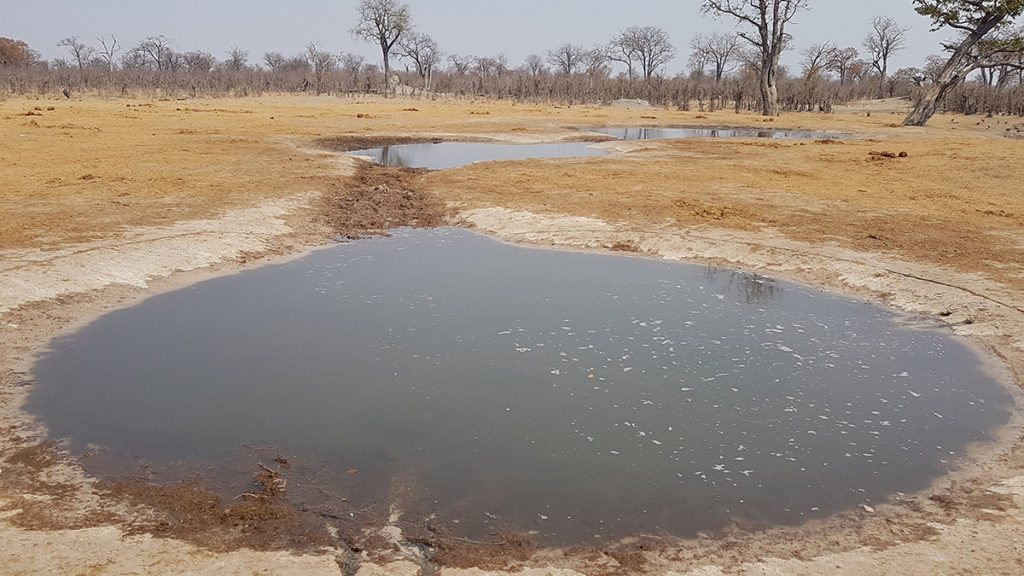