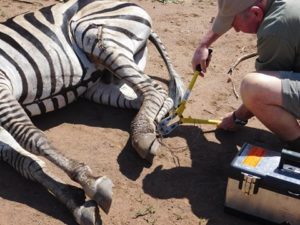 Wire snares can be detrimental and extremely painful, making the animal suffer for a long time.

Botswana is home to an amazing array of wildlife and the largest population of elephants in the region, which is the foundation of the country’s flourishing tourism industry. But, as the industry grows, so does the region’s human population, development and activities. Inherent in this, there appears to be a growing number of injured wild animals being encountered due to escalating accidents, human-animal conflict, illegal wildlife trade and poaching.

Snares set for buffalo and elephant are extremely hefty and impossible for the animal to remove without assistance.

Many of the emergencies we have attended to include wildlife seen with snares, bullet wounds or caught in fences. If sighted and called in in a timely manner, cases as these can be addressed with swift action and the animal rescued with minimized harm.

If you sight wildlife in need of urgent assistance, it is crucial to assess the situation as best and safely as possible: Note type and condition of wound, circumstances (is it alone, with its herd, etc,) the animal’s exact location and if possible take photos to share for preparations by the urgent response team. Most importantly, take swift action by calling for assistance immediately while at the scene. In the Chobe area, please call EWB’s Office to assist at +267 625-0202 and/or the Chobe DWNP offices.

Sable freed after being tangled in wire fence.

EWB also plays a key role in educating the community, advising agencies and the general public about living harmoniously with wildlife to try to alleviate or avoid issues, especially potential harm to people or wildlife. To learn more, see Living with Wildlife page.

The snare was removed from this lioness, not a minute too soon. She has been sighted since and reported to be doing well.