Throughout much of Africa, there has been immense concern that large herbivore and carnivore populations have been affected by habitat fragmentation, anthropogenic pressures, and possibly climatic conditions and hunting. In 2011, EWB began their herbivore ecology research by monitoring herbivore populations in both the Okavango Delta and Chobe National Park, ideal locations from which to base comparative studies  to understand the factors affecting wildlife populations. This research forms the basis of long-term, multi-species research monitoring programs. Published results can be downloaded on our Publications page.

Compared to other threatened African megafauna, little is known about hippo biology and ecology, despite their importance as ecosystem engineers. Of the 36 countries that contain hippo populations, the majority of studies have focussed on populations in just a few countries. This project is the first dedicated study conducted on hippos in Botswana.

The study conducted by PhD candidate Victoria Inman from the University of New South Wales, focused on wild populations of hippos in the Okavango Delta and Chobe River, examining the spatial ecology, density, distribution, group size, and demographics of hippos, and determining and quantifying their impacts on the geomorphology and hydrology of areas through the creation of hippo trails. In addition, the project incorporates observational studies to further our knowledge of hippo behaviour, in particular understanding how hippos use their habitat. 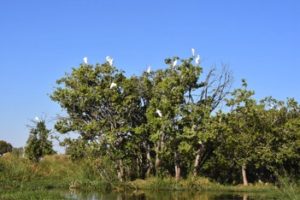 Ecological interactions between large species within Botswana’s wetland and river systems are important and dynamic, however poorly understood.

This research, conducted by PhD candidate Roxane Francis, aimed to determine the relationship between colonial waterbird breeding, large herbivore distribution and river flows in the Chobe River and the Okavango Delta. The key focus is to identify indicators of river sustainability, using waterbird breeding data to guide long-term management of these iconic river systems, and to encourage the continued commitment to the preservation of these wetlands as areas of international importance. This will allow assessments of likely future changes to river flows and flooding as a result of upstream changes and effects of climate change. 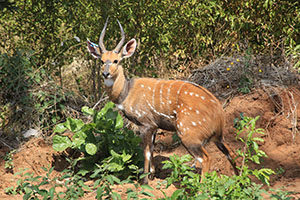 The Chobe bushbuck, Tragelaphus scriptus ornatus, is a subspecies of the more common bushbuck found throughout Southern Africa. This iconic, rare and beautiful antelope is synonymous with Botswana, particularly the Chobe River. However, bushbuck are in catastrophic decline and on the verge of local extinction along the Chobe National Park riverfront.

The loss of riparian thickets within the Park has made them vulnerable to predation by baboons and predators. However, outside, bushbuck have grown in number on private lands, but to the extent that the small closed parcels of land on which they occur can no longer sustain them. Even within these small refuges, bushbuck are threatened by the rapid pace of development in Kasane and Kazungula. Buildings, fences, vehicles, poaching and killings by domestic dogs mean it is unlikely they will survive as a viable population into the future unless urgent attention is given to saving and restoring this small population of antelope through relocation to safe and secure sanctuaries.

Working closely with the Dept. of Wildlife & National Parks, EWB has started a species rehabilitation program, relocating bushbuck to safe sanctuaries to secure a viable founder population, until such time their natural habitat can be improved and protected so they may repopulate safe habitats. meanwhile determining a feasible long-term strategy for the survival of the species. 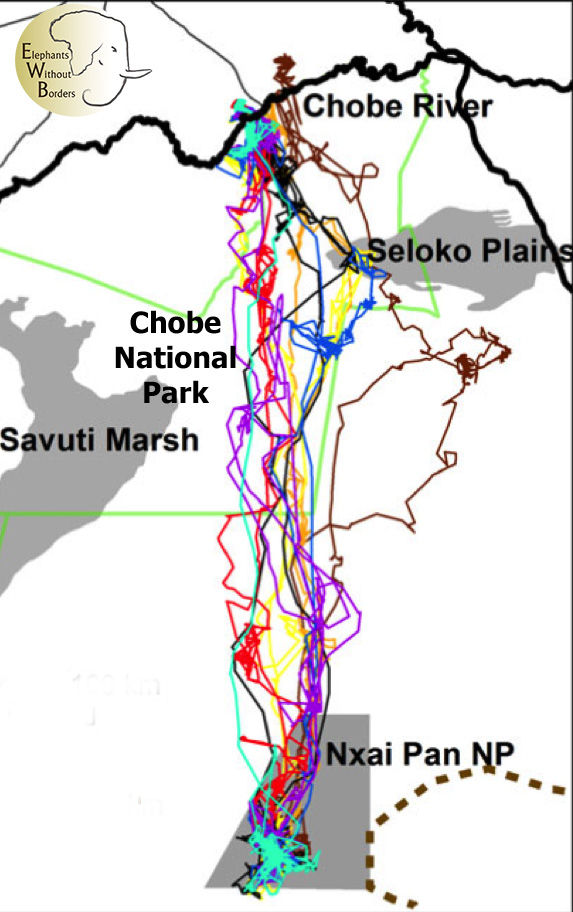 This ground-breaking research discovered the longest intact mammal migration on the African Continent. The zebra migration is from the shared floodplains of the Chobe riverfront, between Namibia and Botswana to the Nxai Pan-Makgadikgadi National parks. This critical zebra route, a round trip, straight-line distance of close to 500 km is greater than that covered by zebra and wildebeest during their well-known seasonal journey in the Serengeti ecosystem, and is worthy of immediate conservation attention. It had never been mapped before and is a major conservation finding at a time when long distance movements are being lost around the world, thus preserving migratory corridors are becoming more and more crucial to safeguarding large populations of wildlife. 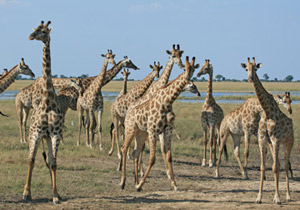 Wildlife surveys shown a declining trend in Botswana’s giraffe population, particularly in the Okavango Delta. Whilst ecological information is available for giraffe populations elsewhere, the giraffe of northern Botswana have, until now, been neglected as a focus for ecological studies. EWB initiated the first dedicated giraffe ecology study in the country. In collaboration with the Giraffe Conservation Foundation, Kylie Mcqualter, a PhD candidate from the University of New South Wales conducted a comparative study examining the density and distribution, demography, ecology, behavior and social organization of giraffe populations occupying two vastly different environments, the Chobe National Park, where giraffe numbers appear to be stable and in wildlife concession NG26 in the Okavango Delta.

While Botswana experiences a 30-year drought cycle, in contrast, the flooding regime in the Delta steadily increased for 12 years from a low to a high flooding cycle, resulting in a dramatic change of grazing habitat during the flooding season. Thus, many of the marginal grassland areas have been converted to floodplains of unpalatable sedges. EWB’s aerial survey trend analysis has shown a decline in grazing herbivores in the Delta, over the last 15 years. The main species that are of concern are the grazers that depend on the green flush of the floodplains: buffalo, red lechwe, tsessebe, wildebeest and zebra.

EWB deployed GPS monitoring collars on zebra, buffalo, and for the first time in the country, red lechwe, who revealed remarkable movements in relation to the changing floods, to help understand what may be a driving factor in herbivore population declines in the Delta. Kyle Burger, PhD candidate at the University of Witwatersrand examined the relationship of grazing herbivores and their environment, the effect of flooding on the vegetation composition, vegetation change on wildlife population trends, and how certain grazing herbivores move in relation to the flooding parameters in the delta. 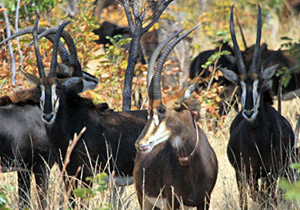 Roan, sable and tsessebe are considered woodland species and presently there is very little information available within northern Botswana for these particular species, other than anecdotal observations. All three species are of conservation concern at the national level because of their estimated low numbers and the various small subpopulations making up the national metapopulation are isolated from one another. Botswana’s roan population is only about 1,500 animals, its sable population estimated at 3,000 and its tsessebe population may be one of the largest yet in Africa – of the same order as Zambia’s at about 10,000 animals, but yet still are found in isolated pockets. As part of EWB’s program focusing on Botswana’s Forest Reserves, satellite-monitoring collars were deployed on sable and roan in Chobe, where both species appear to be increasing in numbers.

However, further research should be undertaken, as an understanding of what factors cause animal populations to increase, decrease or remain stable is fundamental to the species restoration and conservation, which we believe should be based upon sound studies of the species’ population ecology and habitat requirements.