EWB is a strong and capable organization, but we recognize the vital role of forming strategic alliances and partnerships with institutions, organizations and individuals who share a common vision and purpose, in order to reach a common goal in conservation at a meaningful scale through scientific research and data. To read scientific papers of EWB research, please visit our Publications page to download! 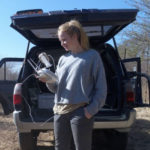 Roxane Francis, PhD candidate, examined the relationship between colonial waterbird breeding, large herbivore presence and seasonal flooding in the Chobe River and Okavango Delta, as indicators of floodplain dynamics and ecosystem health, while evaluating waterbird breeding data as waterbirds are umbrella species for species conservation. Her research was co-supervised by Prof. Richard Kingsford Director at the  School of Biological, Earth and Environmental Sciences, UNSW. 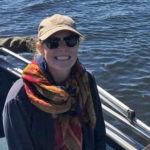 Victoria Inman’s PhD project, Hippo highways: the role of hippopotamus (Hippopotamus amphibious) as ecosystem engineers in the Okavango Delta, is focused on understanding the scope and specifics of the hydrological impact of hippo movement demonstrating the role hippo play in the ecosystem.  With an increased understanding of the factors determining the hydrology the delta, accurate predictive hydrological models will be produced. The accuracy of these models is particularly important given the imminent threat of anthropogenic climate change and in the context of declining hippo numbers across the Continent. 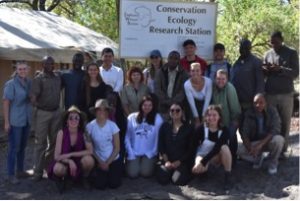 PLuS Alliance River Basin Ecosystem Management course: hosted in EWB’s Conservation Ecology Research Station, is an exciting collaborative endeavor with professors and students from University of New South Wales (Australia), Kings College London (UK), Arizona State University (USA) and the University of Botswana Okavango Research Institute. The course focuses on teaching field-sampling techniques while providing students an understanding of politics, governance and management of a river’s ecosystem by considering the constraints and factors shaping the Okavango Delta. This course is quickly becoming one of most popular at each of the Universities, as being incredibly memorable and exhilarating as the students are immersed into the Africa bush. 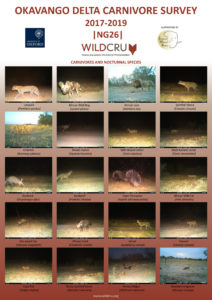 WildCru: EWB signed MOU’s in collaboration with University of Oxford Wildlife Conservation Research Unit: Presently, EWB is collaborating on efforts made in the human-wildlife coexistence and conflict interface, led by Jess Isden of WildCru’s Trans-Kalahari Predator Program and Wildlife Guardian Program in the Chobe Enclave.

The  Botswana Lion Corridor Project with Dominik Bauer and Kristina Kesch, both contributing their species specific data to a project entitled “Large herbivore migrations and their impact on habitat connectivity for African lions in the arid regions of southern Kavango-Zambezi Transfrontier Conservation Area.” 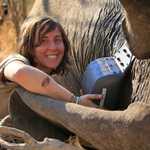 Samantha Garvin As elephants are increasingly threatened in Africa, how conservation organizations act now can have serious implications on their continued  existence in our region. “Sam” joined the EWB team to conduct her study of human-elephant conflict for her MSc degree at Yale University, analyzing how multiple levels of conservation participants identify the problem with crop-raiding elephants and their possible impact on the outcome of conservation programs. 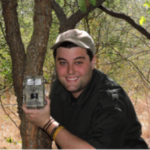 Matt Davis received his MSc at London’s Imperial College in Conservation Science, conducting research on the utilization of artificial waterholes in Chobe National Park. It’s vital to understand the implications that artificial water holes can have on species and ecosystems, and the results of this project could have a major impact on wildlife management in the region. Presently, Mattis is pursuing his PhD at the University of New South Wales. 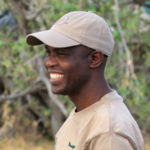 Elford Seonyatseng is a Senior Wildlife Warden with Botswana’s Department of Wildlife & National Parks and joined EWB as a participant of the Great Elephant Census Botswana survey team. EWB is working with Elford on his research with the DWNP on the distribution, movement and social dynamics of elephants in Bobirwa sub-district and north-east district in Botswana. He will also take a lead on collaborative surveys between EWB and DWNP. 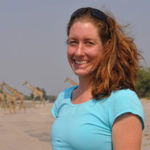 Kylie McQualter, PhD joined EWB in collaboration with the Giraffe Conservation Foundation as a PhD candidate, studying at the University of New South Wales under her supervisor Dr. Keith Leggett, facilitating Botswana’s first giraffe ecology research as part of EWB’s Herbivore Ecology Program. She completed her thesis and readily published her findings in the African Journal of Ecology. 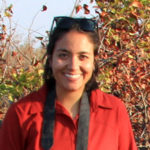 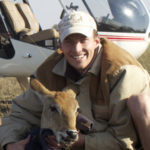 Kyle Burger completed his PhD Thesis “The relationship between flooding parameters and grazing herbivores in the south-western Okavango Delta” and his BSc with Honours in Zoology with distinction at the University of Pretoria. Kyle studied under a unique programme, which gained him his MSc into PhD at the School of Animal, Plant and Environmental Sciences, University of the Witwatersrand.

Monica Morrison, through Stellenbosch University’s ground breaking Research Uptake and Utilisation programme, Monica investigated how survey results are communicated and used by stakeholders engaged in the management, conservation and use of wildlife resources in northern Botswana. She hopes to shed more light on the policy and scientific context of production of wildlife survey data in the region, looking at the factors that influence uptake of data, and examining communication approaches that provide policy makers with the information they need to support decision-making. 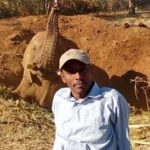 With the support of EWB, Sintayehu Workeneh Dejene is studying the population status and movements in Ethiopia, in collaboration with Haramaya University, College of Agricultural and Environmental Sciences. He also played a key role in securing Ethiopia’s participation in the Great Elephant Census and was one of the aerial observers for the surveys.

Carrie Roever, PhD  completed her PhD in Zoology at the Department of Zoology and Entomology, with her thesis entitled “Spatial determinants of habitat selection, mortality and connectivity for elephants across southern Africa” incorporating EWB’s satellite monitored elephant movement data bank into her analysis. Recently, Carrie has published four chapters from her thesis in scientific journals and others are in review.

Professor Paul R. Manger of the School of Anatomical Sciences Faculty of Health Sciences at the University of Witwatersrand, together with a team of MSc candidates, collaborated with EWB on the first scientific research on wild elephants sleeping patterns, entitled “A Study of Rest and Activity Patterns in Free-Ranging African Elephants.” 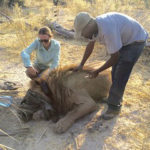 Carolyn Whitesell attained her PhD candidate at the University of California, Davis, receiving support from EWB on her research studying human-lion conflict within the Habu village area, which lies adjacent to the western side of the Okavango Delta.

Robynn Kotze University of the Witwatersrand, South Africa, recently completed her MSc with support received from EWB on “Lion population dynamics, demography and range use in the Okavango Delta.”

Kim Young was a Post-doctoral Research fellow at the Conservation Ecology Research Unit, Department of Zoology and Entomology, where she also received her PhD. Kim has published in many scientific journals, technical reports and popular articles and is presently researching the relationships between the spatial and temporal distribution of resources, movement patterns and demographic responses in northern Botswana’s elephant population.

Michael Mole graduated with his MSc at University of Pretoria Conservation Ecology Research Unit, under the supervision of Prof. Rudi van Aarde in collaboration with EWB, examining climatic drivers of microhabitat selection and spatial use patterns in savanna elephants.

Shaun Rodrigues received his MSc, also at University of Pretoria Conservation Ecology Research Unit on his study on elephant thermoregulation and how it affects elephant behaviour and potential impact on their environment.

Julianne D’esterre Roberts of Trinity College, Dublin, Ireland is using EWB data for her study, entitled Elephants in the City: An Investigation on the University of Zip’s Law to advance research on the ecology of wildlife in the Okavango Delta, Botswana, with a view to determine whether Zipf’s Law holds for elephant herd size distribution in the wild.

Rachel DeMotts is a Mellon Assistant Professor of Global Environmental Politics at the University of Puget Sound in Washington, USA. Partnering with EWB, she investigated two projects, first, a gendered view of community-based conservation in Botswana and Namibia, particularly on the basket weaving industry. And secondly, conducting participatory research in Kazangula village to better understand the changing interactions between people and elephants. 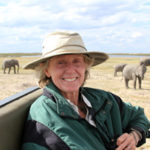 Virginia Pearson was a Guest Researcher at the Department of Molecular Biology, Princeton University, Princeton, N.J. and Research Liaison for the National Geographic Society, Washington, D.C. EWB is a collaborative partner on Virginia’s ongoing research using genomic analyses to ensure sustainability of global elephant populations, by supporting her work on the origin and current status of EEHV herpes virus strands in African elephant populations.

Anna Songhurst completed her Phd at the University of London with EWB’s support conducting aerial surveys and guidance on her research on the “Competition between people and elephants in the Okavango panhandle, Botswana.”