Naledi tells the incredible story of a baby elephant born into a rescue camp in the wilderness of Botswana. Born on an incredibly starry summer night in 2013, Naledi (which means ‘star’ in Setswana) was orphaned just six weeks later when her mother died. This meant that immediate action had to be taken to both comfort Naledi – and save her life. It took a dedicated team working around the clock to nurse her back to health. Naledi’s boisterous yet loving personality ensures a deep bond with the staff at the rescue camp as well as the female elephants of the rescue camp, but this isn’t just one elephant’s story. At the same time, Elephants Without Borders founder, Mike Chase has launched the most ambitious ever census of African elephants: a momentous effort to ensure elephants survival. He and his team are racing to defend an entire species while struggling to save a single life.

Off the Fence Films https://www.offthefence.com/Brand/2051/naledi-a-baby-elephants-tale 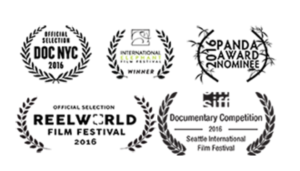