The Central Kalahari Game Reserve (CKGR) covers a large section of central Botswana and is classified as a semi-arid desert, void of surface water for most of the year, an environment hostile to most creatures not adapted to a hot, dry climate. The landscape is dominated by grasslands, home to wildlife such as giraffes, cheetahs, hyenas and wild dogs. It is only after the summer rains, which fall between Nov – March, that the pans in the CKGR fill, attracting large herds of oryx and springbok…. and more recently, elephants. 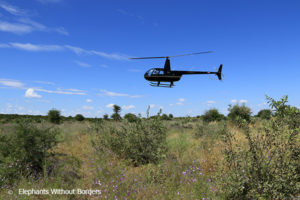 Typically, the CKGR is not known as part of the elephant range, however as elephant movements across the northern borders have decreased, some herds are exploring and venturing into new territory south. In the past few years, EWB deployed monitoring collars on bulls sighted on the periphery of the southern range, which showed us that some elephants are now moving into the Central Kalahari seeking refuge, moving in and out of the National Parks.

This season more elephants, including breeding herds have been sighted in unknown territory, coming into contact with cattle farms and villages around the CKGR, which were previously void of elephants. There is cause for concern over potential damage to property and may be intimidating to people who are not used to seeing elephants…  some may never have ever seen an elephant!

So to better understand the unknown movement patterns of elephants in this new frontier, EWB once again took to the skies, searching for elephants in hopes to deploy more collars to monitor the herds. From the skies we saw clear evidence elephants are penetrating further south into the Kalahari.

Two years ago we only collared bulls, but this year, to our amazement, it was the first year we sighted elephant family herds, numbering up to 120, divided into two large, congregated groups. Thus,  managed to deploy collars on females in each of the herds. 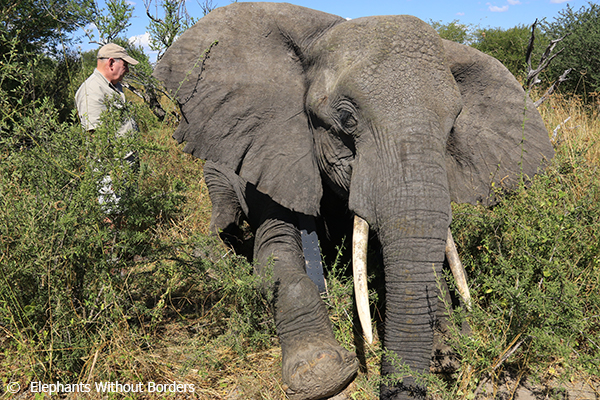 We also felt it time to check on one of the bulls that had led us there in the first place, “Kwebe.” Kwebe is a handsome, large bull that had made some fascinating treks over the last couple of years. He also often moved closed to cattle farms and fence-lines moving down into the CKGR. So, it was decided Kwebe is a prime candidate for long-term monitoring as the elephant range expands, thus had to change his collar as the first’s battery life was depleted.

“From the air it wasn’t obvious, he appeared healthy and nothing amiss… it was only once the elephant had been darted and we were able to get closer, could we tell that he had sustained injuries.” Robert Sutcliffe explains. “Upon examining the injuries we discovered two bullet wounds that appeared purposely aimed at his head.” 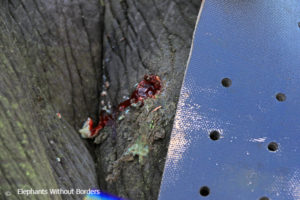 One of the cleaned bullet wounds

Such a shot is known as a “brain shot,” used by poachers and hunters, considered a clean kill. However, the bullets missed their mark and appeared to have been deflected by his monitoring collar! Our wildlife vet, Dr. Larry Patterson checked and cleaned the wounds and concluded that he would heal fine. We cannot confirm if the intent to kill was from a poacher or a result from a conflict situation, however, a few months ago, there had been reports called in of suspected poaching in that area. We do not know of the outcome of the situation, but we can conclude “Kwebe” is one lucky bull, as it appears his high-tech necklace may just have saved his life. 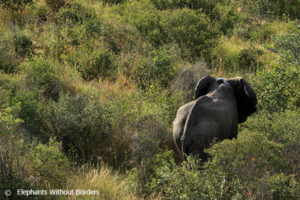 Lucky to be alive, Kwebe moves off into the wild

Moving on, we noted other elephants may also be expanding their ranges in another direction. We received a request by the Omogolo Wildlife Trust for us to assist in determining elephant movements in the areas they have been working, southwest of the Okavango Delta towards the Namibian border. So with generous support from the Trust, we turned our field activity to the west.

We flew far into this remote wilderness, sighting remnant individuals of gemsbok, zebra yet little sign of elephants.  Rumor has it, that elephants move out towards the Namibian border sand dunes in the wet season and move back towards the delta as the dry season progresses. Unfortunately, we could not find any breeding herds, only signs of their passing through, but managed to deploy monitoring collars on bulls in the area to unravel the mystery of this potential range expansion.

Thank you very much to the Omogolo Wildlife Trust for your kind support of this research. We are looking forward to working with you further on this collaboration and providing the findings to you and the communities in your area.  As always, a pleasure to work with Helicopter Horizons, pilot Mike Holding and wildlife vet, Larry Patterson. And, much appreciation to Botswana’s Dept. of Wildlife & National Parks and Ministry of Environment for their continued support and guidance on our projects.

Learn more about EWB elephant monitoring and other projects: https://elephantswithoutborders.org/what-we-do/elephant-research/

To support EWB’s work, you can donate here. Thank you! 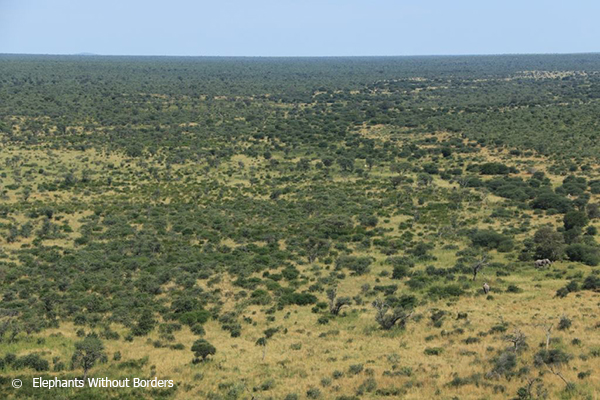