On the evening of Sep. 4th Elephants Without Borders (EWB) received a call from Dept. of Wildlife & National Parks (DWNP) Problem Animal Control (PAC) about a young elephant that had fallen into a well and was asking for EWB’s assistance to help attend to the problem. Immediately, Kelly called wildlife veterinarian Dr. Larry Patterson to inquire if he was available and willing to respond, as soon as possible.

Our team gathered what we thought was needed and drove to the scene, about an hour and a half away to the Chobe Enclave floodplains. Upon arrival, we saw that the elephant had its back legs stuck in thick, dark, clay mud, but her front legs and head were up and out of the well. She was also much larger than reported and expected. 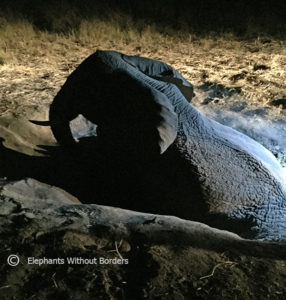 Her body and legs were stuck in thick, dark clay mud

It was quickly decided that due to the elephant’s size, more equipment than what was available would be needed.  One of the DWNP vehicles returned to Kachikau to source more chain/rope and spades. Meanwhile, the EWB team made calls to source a possible JCB or tractor to assist.

DWNP were successful attaining more chains and spades, while EWB were successful at finding someone with a tractor in proximity willing to assist. We thought that there was a possible tractor nearby, owned by Phil O’Shaunassey, the owner of Kasane’s Garden Lodge who also has a farm near Parakarungu village. Phil, although out of town, provided permission to use his tractor. Garden Lodge manager, Gabi reached out to the farm and spoke to the man looking after the property, Stan Martin, who agreed to bring the tractor and more supplies. DWNP organized with Stan directions for him to meet them and guide the tractor to the scene.

Everyone at the scene switched off their vehicles and lights to not stress the elephant further than she already was. The teams waited in the dark for the tractor team to arrive. In the interim, wildlife that surrounded the vicinity were a large herd of buffalo, a pack of curious and persistent hyena, eland and a herd of elephant (may be her family herd.)

The tractor team arrived at the scene at almost 2am. Dr. Patterson laid out the plan at how the operation would take place to ensure a swift and successful exercise. Everyone was focused and cooperative. Dr. Patterson immobilized the elephant and monitored her to let everyone know when it was safe for her to be approached. The elephant was carefully monitored and her breathing was stable. 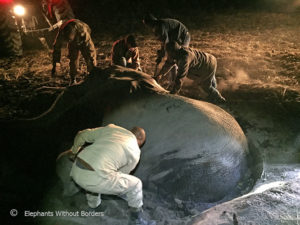 Winched out bit by bit, her legs had to be dug out from the clay 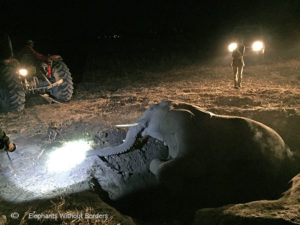 Without the tractor, we would not have succeeded

The chains were wrapped around her body and bottom, a slant was dug for ease for her to slide out, and the thick, clay mud was removed around her legs, as she was pulled out of the well. It took a full hour, but she was out by 3am.

During the exercise, DWNP members raised concerns but were now relieved as she had been in the well for over 3 days. The timeframe was very concerning because her position and lack of food and water could have weakened her to a point that she would not be able to stand, even if she had not sustained any injuries. So, it was understood that the elephant would need some time for her legs and body to recover from being stuck in a single position and the stress she had endured. So, everyone departed as the EWB team agreed to stay to watch and monitor her until she could stand and so we could determine if she would be all right.

After an hour or so, she bent her back legs slightly and attempted to stand several times. After each time, she would take several minutes to rest. At 6am, first light, Dr. Patterson checked her vital signs, which were still good, but was concerned that she was in one position for 3 hours. So, using a rope and our Landcruiser, we flipped her over to lay on her other side. 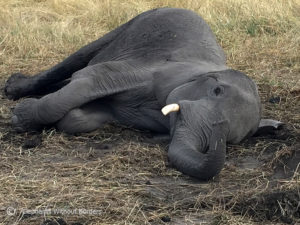 The situation was now dire and bleak 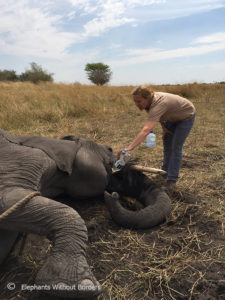 She liked the cool water on her tongue

The elephant tried to sit up a few more times, although her attempts were futile and weak. She appeared to be getting weaker and no longer was attempting to stand. EWB decided desperate measures were needed and called our office to bring in further supplies.

The supplies arrived at 0900 and we knew the best chance to help her would be to administer glucose and Ringers drips, to revive her bodily fluids and energy. So, the process began. We had to flip her a second time to relieve the weight and pressure, again. We kept her tongue moist, as she appeared to like the water, touching her mouth with the tip of her trunk as we cooled it. Her body was also kept cool, under the rising sun. 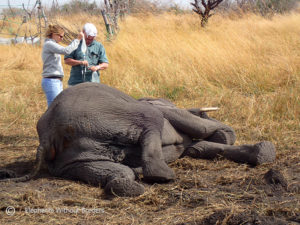 By 1230 our team exhausted all the resources available. The elephant had been given over 20 litres of drips and liquids. So, we decided that we would have to attempt to assist her by pulling her up with our rope and vehicle. Several attempts were made in coordination with the elephant’s own will to stand. The situation seemed dire and our hopes were diminishing.

At 1300, with what was thought may be the last attempt… the elephant tried to sit and with a strong pull by our vehicle with the right rope configuration to assist her, she moved to a sitting position and quickly stood up! It was an unbelievable moment of joyful tears and relief for us all… but can’t imagine how relieved and shocked she must have been!

She remained in a firm stance for at least 10 minutes before she started to shift her feet, one at a time. Slowly, as her legs became more revitalized she took small steps, picking up all her feet (not dragging any of them) and moved a few meters. She remained in a small space, while walking slowly and carefully. 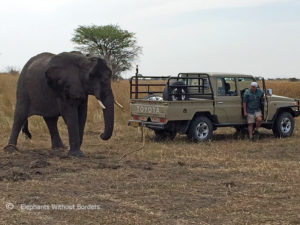 Tears of Joy, it was by miracle that she was able to stand!

She worked her way over to our Landcruiser, rubbed her body against the side and was looking at Dr. Patterson through the side window. At one point, she lifter her trunk and allowed Dr. Patterson to pet her through the window. She stared at him showing no concern or stress. She did no damage to the car and was meticulously careful of her movements. She remained pressed next to the vehicle for over a half hour… We had never seen anything like this. It may be an unscientific opinion, but we firmly believe she was thanking us!!

We continued to observe her for another 2 hours, as she slowly recovered and walked further away from the site. It was agreed that she had enough in her system to get her through and we believe she should fully recover. Due to her age,  we also believe she will know where to go to attain water (only a few hundred meters away) and possibly find her family herd again.

It is nothing short of a miracle!

EWB would like to express Thank yous to DWNP Kasane and Kachikau for their cooperation, the Ministry MENT for continued support, and especially Dr. Larry Patterson for his tireless efforts. Special gratitude goes to Phil O’Shaunassey and Gabi from Garden Lodge and Stan Martin and his team for their willingness and expedience to this incident, as without their assistance we would not have managed to save her. 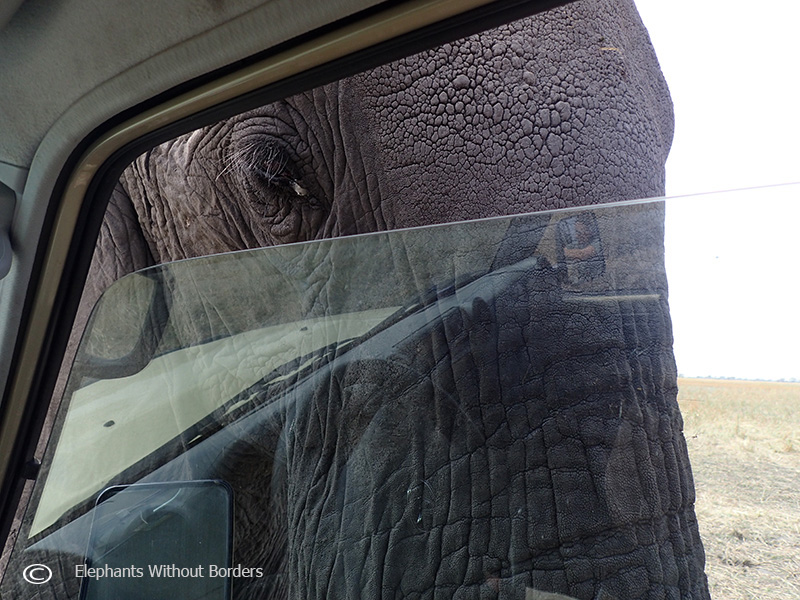 Peering in to the window, she let us touch her in thanks 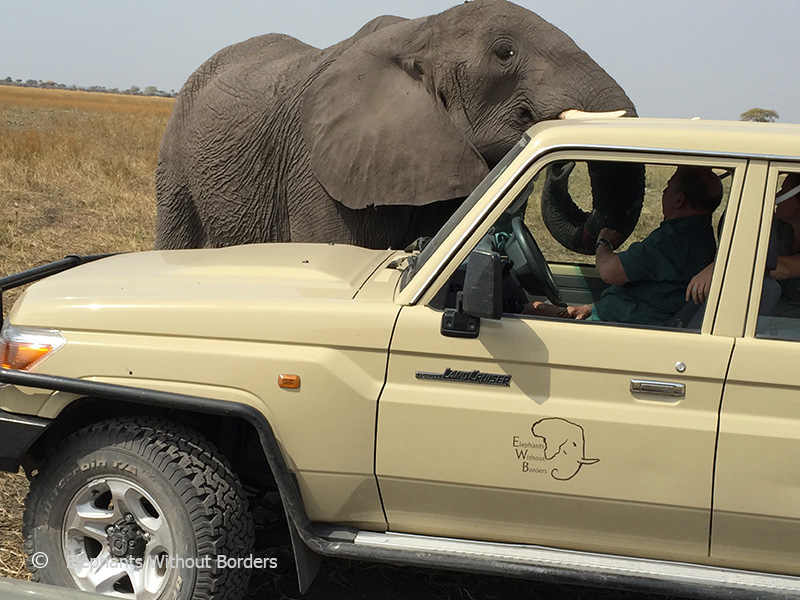 We had never seen anything like this elephant gratitude. Thank you, Larry!